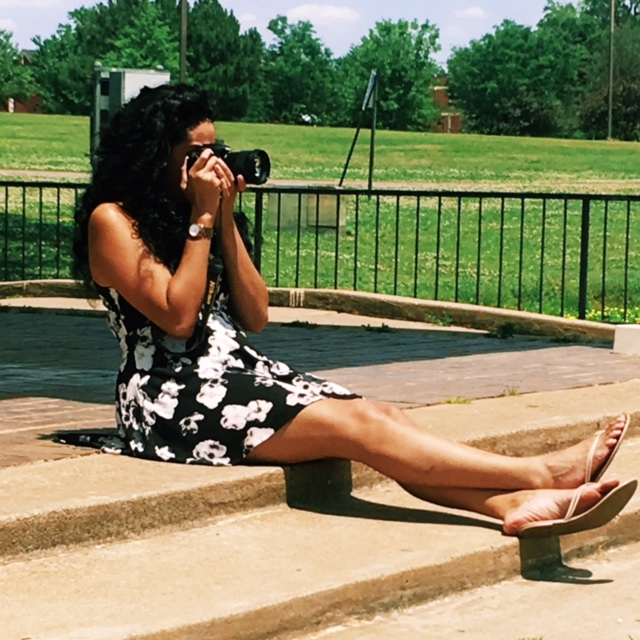 Like all of us, Kaye Chambers of Kaye Creates loves music. However, she is also a mom, photographer, techie and so much more. Her passion for technology and people is what makes her the successful owner of Kaye Creates, but her story is unique in every way. Even her discovery of hip-hop as a young adult has helped shape her unique view of the world—a view that she captures in her writing, photography and every creative project she takes on.

In 2011, the former fashion major, and daughter of UK natives was boiling over with frustration after witnessing the aftermath of Hurricane Katrina. Laying dormant was a passion to help people in Little Rock, Arkansas—a city still rich with the spirit of activism. When the first Apple Store came to Little Rock, Kaye went all Lia Neal. Jumping in head first, she quickly became the local authority on everything Apple. It may not have been immediately apparent, it was an opportunity that would change everything.

I got to mirror my passion for people and for their projects with the love I have for technology, and it just kind of evolved.

“Apple had a separate team of people that deal mainly with small business solutions and that just comes from Apple products not always being great for certain projects or more expensive. Or, when you’re a small business owner you don’t always have to money to invest in the most expensive products. So Apple realized we were going to have to really beef up customer service and these people need to have an insane amount of training. Anything that Apple felt like a customer may need help on, they sent the business team to get some training on. So that’s when I started to realize that there’s money in consulting and there’s money in helping people, and marketing just kind of comes second nature.”

It wasn’t until later that Kaye realized that her passion for tech, was only the springboard for the conception of what is now Kaye Creates. Just as she began to really find her niche as one of Apple’s shining starts in Little Rock, Kaye was put on bed rest and sent for early maternity leave.

“I was gone, and people were calling up to the Apple store like crazy like, “Kaye was the one that sold me my iPad, and she was helping me with my website and I need her. I need her!” I started telling people, “Yo, these are my customers, give them my number.” I was on bed rest doing all this consultation, making bread, and it shouldn’t have happened that way. I realized very quickly that I was making more money doing my own stuff and helping people, than I was working for Apple. So I don’t have the let-me-just-quit-my-job-and-run-in-to-business-story that a lot of people think is so super spectacular. I had several clients that I was working with before that happened.”

As Kaye’s influence began to spread beyond the walls of Little Rock’s Apple Store, she began to think of new ways to help people build their own businesses using technology and unique marketing techniques. For her, there was nobility in helping people and it seemed she was getting closer and closer to realizing her life’s work.

“I started to catch the things that my clients were doing that were setting them back, and I started blogging about it. I just tried to be a resource for people that needed help so they wouldn’t keep recreating the wheel and going back and forth. Photography was just one of those things. I realized that I would be building a website for someone and I would be waiting on a photographer to drop photos for a photo shoot and I got tired of that. I was charging like nickels and dimes in the beginning. I was charging like $300 to set up a website. They were paying their photographer like $400 and me, $300. So I thought, “why don’ I just come up with some packages?” So I started really pushing myself in photography. I will say, it’s probably the thing that I enjoy the most now, but Kaye Creates started as, IT Solutions with Kaye.”

Creative people, particularly have an exceptional way of describing how music influences their work. Now that she’s behind the lens, Kaye can’t help but acknowledge how music has influenced how she sees her subjects. There’s no doubt that all people have their own special connection with music. However, it’s a story unlike any one you’ve ever heard.

I grew up in a household of The Beetles and Broadway show tunes.

Her earliest hip-hop memories where not early at all. Her discovering of hip-hop didn’t happen while riding in the car with an older cousin—or simply because that’s what was on all the black radio stations at the time. It certainly had nothing to do with Rap City with “Joe Clizzzzair.” It’s safe to say that it wasn’t even a discovery. It was an intentional uncovering of a culture, a little bit at a time.

“My brother is a performing artist and he would sing at the top of his lungs. He would be singing Broadway shows and traditional music types. My dad is a really cool guy. We’re talking about people who come from England, so he’s like Woodstock. He listens to a lot of different kinds of music, but when it came to black music, I had to really find it on my own.

Like Montell Jordan, and all the songs that came around that era— your Snoop Dogg, even Tupac and Biggie— I skipped that. I wasn’t a kid listening to that music and not knowing what they’re talking about.

In the beginning, I really fell in love with 90s R&B. I would listen to Boys II Men. I would listen to R. Kelly, and to be an adult when you’re first getting in your groove and you think you’re hot, and you think you’re in love is so much different than to experience him with your mom and dad singing it to you. So I have such an appreciation for the music, because I had skipped so much.”

With an uncommon appreciation for the context of such legendary music, Kaye became obsessed with the people behind the music and hearing as much music as she could.

I became one of those people that everyone hates on social media—I became a music snob.

There was a time when Kaye had a hudge collection of CDs that she lugged around in her car, and things haven’t changed that much. In the age of streaming, Kaye admittedly subscribes to Spotify, Apple Music and Tidal simultaneously to make sure that she covers all her bases.

Kaye has an impeccable ear for the themes and messages in the music she listens to. The photographer says she simply listens to music as it is released and lets it play throughout her day. Not only does she take her time ingesting the never-ending stream of music, she sits with it for as long as she likes.

She also isn’t ashamed to stand up as a proud member of the #BeyHive, especially since the release of Lemonade in this critical time for Black America.

“I can be on my phone in a waiting room, or in a coffee shop waiting on a client and watch this art that Beyoncé has just given to us. I have probably watched the entire video for Lemonade at least one hundred times. No lie. Man, I was propping my phone up at work and I would watch it and it would all the way through. Next thing I know, it’s playing again and I’m not stopping it. And I’m just looking for the different angles, and I’m seeing things that I’ve missed before. You can’t deny that she has given us every reason to respect the amount of effort and energy that she puts into her craft. If you don’t fool with Beyoncé for anything else—if you don’t learn anything else from her as a black creative, and as a woman, it’s that the shit is going to be polished to the t. She’s not going to half-ass it. You’re not going to get anything sloppy. You’re not going to get anything last minute. You’re going to get a polished piece of work. To me, that’s what it’s all about.”

“Beyoncé is such a very intentional artist. Even if you don’t love her music, you have to understand that we as black people have so much power – more now, than ever. Look at what Morgan has done with Blavity. We are able to create platforms where you can’t tell me what I want to do with my business and my people. We can be so intentional about the decisions that we make. If Target doesn’t want Beyonce, well bitch, we’re not going. It amazes me how much is taken from us as black people, and our culture, and our music, and our artists. White people love to whip and NaeNae, but we’re able to take artists like Beyoncé and say, “but you’re gonna get this message as well.” That’s why Lemonade matters, to me.”

If you want to know what Kaye is listening to right now, check out the playlist she created just for Pretty Menace. Take a listen and let us know what you think. If you want to learn more about Kaye Creates visit her website or follow her on Instagram.