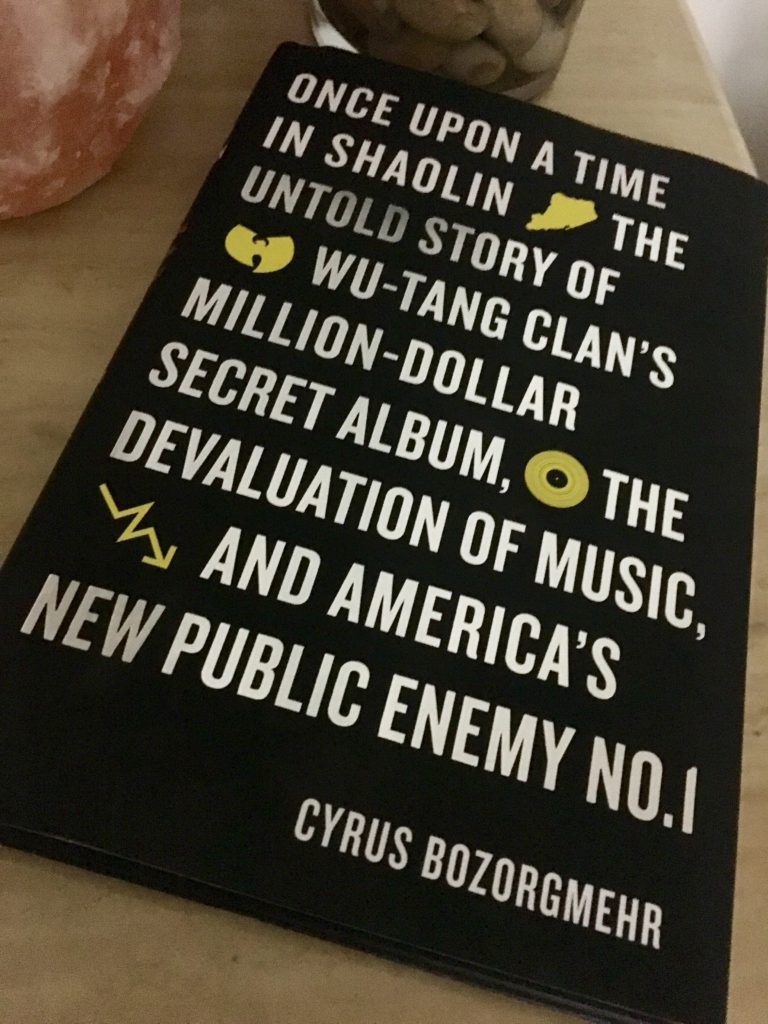 A few weeks ago, I spent a Saturday with my mom. She knows I love Barnes & Noble, so when we spotted one, she insisted that we go inside. Once there, she demanded that I pick out a book that she could purchase for me. I had just finished up “The Autobiography of Gucci Mane”, and had not decided on what was next on my list. However, when mom insists on spending money, you do not argue.

All bookworms have sections of the bookstore that they scour for new reading material. I usually browse the music section for a book about Hip-Hop that I don’t already own. This particular Barnes & Noble had 3 books about Hip-Hop. 2 of them I own. One I had never even heard of.

“Once Upon A Time In Shaolin: The untold story of Wu-Tang Clan’s million-dollar secret album, the devaluation of music, and America’s new public enemy No. 1” looked interesting enough. The incredibly long title printed brazenly on the cover sent me dashing over to Moms with a (hopefully) worthy new read in hand. I had not heard the book mentioned, but I was also curious about how the author, Cyrus Bozorgmehr, was qualified to tell such a story.

Although, as it turns out, Bozorgmehr lived through this entire ordeal, he tells the story like someone retelling the plot of a movie that just changed his or her life. “Once Upon A Time In Shaolin” is a story with all the elements of a Quinton Tarantino movie. So it’s no wonder that Bozorgmehr struggles to grasp details of how this project spun wildly out of control.

The author outlines how a soft caress of fate placed him in the company of RZA and Cilvaringz and made him an integral part of developing Once Upon A Time In Shaolin—their symbolic album and work of art. Rap fans will enjoy learning about how Cilvaringz conceptualized the album’s sound and worked with the members of Wu-Tang to get recreate something that Clan fans would fiend for or despise.

Cilvaringz’s rise to clandom is a beautiful tale within itself. His relentless pursuit of RZA is worth reading about—it’s incredibly inspiring. Bozorgmehr takes his time here. This is likely to give the reader an idea of the Moroccan producer’s driven (but bullheaded) personality. Cilvaringz headstrong nature lead him to believe that he could sell a music album as a piece of art (and at a hefty price tag) rather than as an $11.99 download that the world will forget days after it’s release.

The world knows this mysterious album landed in the hands of “the most hated man in America,” Martin Shkreli. However, few of us know how he finessed his way into buying what was destined to be the most important piece of music in modern history. Bozorgmehr describes the sale and the circus that ensued soon after, and it will piss you off. If you didn’t hate Shkreli prior to reading this book, you will curse him mid-sentence if you crack this one open.

The real page-turning content, however, occurs as Bozorgmehr describes the meticulous decision-making behind the album’s “roll-out” and sale. While Once Upon A Time In Shaolin’s guardians undoubtedly had an investor that would soon be checking for his return, they considered Wu-Tang fans and the integrity of the art at every turn. One can only assume those considerations are what made for such a compelling roller coaster of events.

If this book is lacking anything, it’s more insight into the album’s content and the Clan’s involvement. It is likely that those gems were left out for legal reasons. Or, Bozorgmehr simply knew his grazing over those topics would only add to the album’s mystique.

“Once Upon A Time In Shaolin” is filled with rousing creative concepts and art advocacy that will make you scream, “Hell Yes!” Bozorgmehr is genuine and as transparent as possible considering the subject of all this madness is a mysterious (possibly magical) Hip-Hop relic.

On the back cover of the book, there’s a quote that reads “Once Upon A Time In Shaolin” offers a front-row seat as Wu-Tang Clan’s maverick, idealistic attempt at a statement on the current state of the music industry and the symbiosis of art and money backfires, turning into a surreal caper featuring monumental ambitions, even more monumental egos, Bill Murray, the FBI, replica AK-47s, and yes, arguably the most hated man in America. It’s a music book unlike any other.”

Paul Fischer never lied. Pick up a copy. It’s a quick read and worth the time.